Inconsistency of number order between PDF, DOC and TXT with RTL switching

I created a small test project to reproduce the problem. It also includes the test DOC file. Just click “Select Doc” and “OK” (it should default to the path of the file). The plain text will appear on the form but it will also be saved as a PDF and plain text in the folder of the executable.
TestAsposeRTLNumberRange.zip (3.7 MB)

I also tried using a few encodings (UTF8, Unicode, Windows-1255, ISO-8859-8 and ISO-8859-8-i) thinking it might be a visual/logical ordering of the text issue, but there was no difference in the outcome.

Thanks for your inquiry. Please note that Aspose.Words mimics the behavior of MS Word.

Regarding the TXT output, could you please share your expected output here for our reference? We will then provide you more information about your query.

As I mentioned, I tested with a few versions of Aspose.Words including 18.11 (I wrote 18.1 by mistake). There is no problem with the PDF. What I meant was that the text appears in a certain way in MS Word, which we consider okay:
MS Word.png (2.0 KB)
Notice the order of the numbers. In the document I also mention exactly the order I typed the characters in.

However, the plain text I generate using Aspose Words, as shown in the demo application I sent, does not keep that order:
Plain Text.png (6.7 KB)

We noticed the same issue with other cases. I have another example (39.1 KB)
attached (with an “X” to show multiplication).

I also want to mention that I don’t think this is necessarily a Hebrew issue but more of a right-to-left language issue, so I guess it’s the same for other RTL languages.

Thanks for sharing the detail. Please note that Aspose.Words mimics the behavior of MS Word. If you convert your document to TXT file format using MS Word, you will get the same output.

Though MS Word might have the same output, it is still a bug. The actual result is not the expected result, especially when it is displayed as expected in MS Word and in the resulting PDF. Is there any solution or workaround to this issue?

Thanks for your inquiry. Please note that the document formats DOCX, PDF and TXT are quite different. You cannot insert tables, images, etc. in TXT file. So, the output may not be same in these formats. Aspose.Words and MS Word save the document to TXT file format according to the text encoding and text information e.g. language setting. So, you are getting the expected output. Please check the attached screenshot. 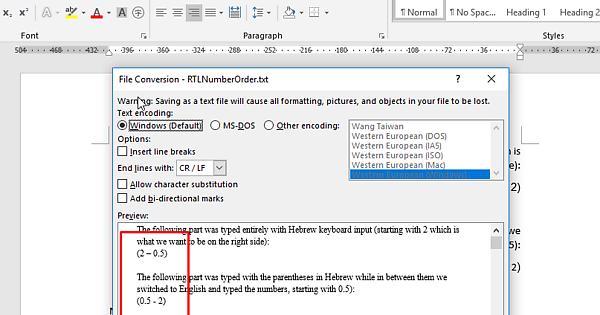 I understand that the formats are different but there are inherent problem that prevent the use of images in plain text files. However, this is no the case for direction and order of characters which can be maintained. This is a wrong formatting of the text, if the order of characters is not maintained. However, it can be done in MS Word from that very same File Conversion window. If you set it to “Add bi-directional marks” it works well:
Add Bi-Directional Marks.png (36.4 KB)

How do we get Aspose Words to do that?

If you set it to “Add bi-directional marks” it works well:

The TxtSaveOptions.AddBidiMarks property serves this purpose. The default value of this property is true.

Could you please save your document to TXT file format using MS Word and share it here for our reference? Please share the MS Word version that you are using. Thanks for your cooperation.

Also, I’m not sure why, but for the multiplication “X” case I mentioned we also need the “Insert line breaks” optional:

Unfortunately, Aspose.Words does not support the requested feature at the moment. However, we already logged this feature request as WORDSNET-14135 in our issue tracking system. You will be notified via this forum thread once this feature is available.

We apologize for your inconvenience.

Unfortunately, TxtSaveOptions.AddBidiMarks was added only in Aspose.Words 18.7 and we’re using 13.9. However, I tested this with the evaluation version of Aspose.Words 18.11 and it doesn’t work either.

I am using Microsoft Office Standard 2013.

Thanks for sharing the detail. In your case, MS Word also does not generate the correct output. Please check the attach image of “HebrewDigitsOrder - Saved in Word 2013 with Add Bi-Di Marks.txt”.

On my computer it appears as expected: Conversion with MS Word result screenshot.png (73.4 KB)

Could it be a difference in system locale causing a different presentation on your computer and on mine? I tried a bunch of different fonts (Tahoma, Times New Roman, David, Arial, Segoe UI,…) on Notepad and couldn’t reproduce the way your computer displays it. The closest I’ve come was use the Terminal font with the OEM/DOS script:
MS Word conversion with Terminal font screenshot.png (28.5 KB)

We have logged this problem in our issue tracking system as WORDSNET-17853 . You will be notified via this forum thread once this issue is resolved.

We apologize for your inconvenience.

Here are some of my settings: 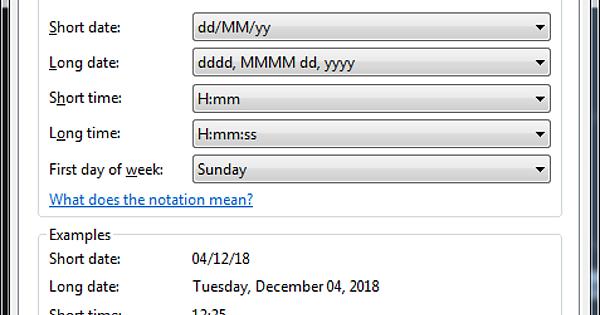 Let me know if you need me to provide additional information.

Thanks for sharing the detail. We have logged it in our issue tracking system.

Thanks for your patience. It is to inform you that the issue which you are facing is actually not a bug in Aspose.Words. Please use the following code example to get the desired output.

Even if it did work by setting encoding 1255, it would not be exactly as in MS Word since TextSaveOptions is using codepage 65001 (UTF8) by default.

Let me know if you need me to attach anything.

Thanks for your your inquiry. We have tested the scenario using the latest version of Aspose.Words for .NET 18.12 and have not found the shared issue. Please check the attached image and output document. 18.12.zip (454 Bytes)

In the image you shared there are extra marks displayed near the numbers. I guess those might be the bi-directional marks. However, those are not present on my computer when I open the output from MS Word. Also, I opened the text file you attached and on my computer although it doesn’t display those marks as in the image you attached, the ordering is still incorrect:
image.png (35.3 KB)

Thanks for your your inquiry. Please use the latest version of Aspose.Words for .NET 18.12 and generate the TXT file by using following code example at your end. Please share it here for further investigation. Thanks for your cooperation.